While we are rapidly approaching the release date for the rulebook (Yay!), we have here our sixth and final Sneak Peek featuring none other than us, 350 years from now! That’s right, True Humans are the fittest survivors of our species who are bravely fighting to stay alive in a world gone mad. We’ve also listed The Purge Faction of human zealots hell bent on killing off every mutie on the planet. And we’ve added ALL of the Champion Traits in the book.

True Human – Survivors of the Triple Helix event who were not mutated or killed are known as True Humans or TruMans in common parlance. True Humans have evolved over the years in order to survive the horrors of Earth, and as such are the strongest, smartest, and fittest paragons of Homo sapiens. Amongst the pro-TruMan rhetoric of the Purge, True Humans have been scientifically renamed Homo Sapiens Invictus. The True Human Lifeform Trait confers the following:

·         Just Won’t Die – True Humans have a Wound Threshold of 5+. It takes 3 Shocked results in the same Turn to cause an automatic Wound on this model.

Almost from the Beginning of TruManity’s recovery from the Triple Helix Event and subsequent holocaust, there has been a stark resistance, nigh fervent hatred, of any and all Mutantkind. The chief archivists of the Architech lodges disagree on whether it was the Ancient text called Malleus Malficarum, the Hammer of Witches, or its rival script, Mein Kampf that was the Holy Word for the True Humans identifying themselves as specist bigots collectively known as The Purge.

This Faction is a schism to the more open-minded Architechs group who see TruMan and NuMan on a more equal footing. The Purge preaches ‘Death to the Mutant’ as a pre-emptive defense against what in earlier times was the literal extermination of the Human Race. They hold that Earth is now an actual Purgatory, and that only when the Mutant is exterminated will the world return to its former glory.

A Purge Crew is led by an Inquisitor (Commander), its Prefects (Veterans), and the ranks are filled by Zealots (Troopers). The Purge will stop at nothing to eradicate any Mutant they encounter, and take great pleasure in finding and using weapons of the Ancients in this task.

Faction Feature: Righteous Zeal! - As long as there is a single Mutant enemy model in play, all Broken members of this Crew automatically Steady at the start of the next SitRep Phase.

Athlete (S) – When making Terrain and Falling Checks this model gains a +1 CBT Rating bonus per level of this Trait. This model’s Encumbrance limit is increased by +1 point irrespective of level.
5 SP/5 EXP/5 EXP

Gunsmith - This Trait allows a model armed with a Longarm or Sidearm to immediately re-roll a single failed Weapon Gear Check Once per Turn.
15 SP

Hawkeye - This model never suffers from any Long Range penalty when executing a Take Aim Action with a Ranged Weapon.
25 SP

Myrmidon - This warrior is trained to fight several enemies at once in melee combat. This model uses its full CBT Rating when Engaged with Multiple Opponents in Close combat. It is also Immune (Panic from Outnumbered Checks).
10 SP

Paragon - This model embodies a superior ability in one particular attribute that exceeds those of its peers.

When this Trait is first taken the Player must choose one of its three Ratings that will be noted after this Trait in parenthesis. For example, if the Player chose Combat he would list it as Paragon (CBT) on the Crew Manifest.

Once per Game this model may add a +3 Rating bonus to any Check that is made with his chosen Rating. This bonus may be added after the Check result has been determined. This Trait may only be taken once by a model.
10 SP

Stubborn – When Broken this model automatically stops fleeing during the Recovery step of the next SitRep Phase as if it had been the target of a Steady Action. It may be Ordered an Action normally later that Turn in the Orders Phase. This Trait does not confer the Move component of a Steady Action.
10 SP

Targeteer - Whenever this model executes a Take Aim Ranged combat Action it may re-roll its Attack Check result Once per Turn.
20 SP

Weapon Expert - Choose a Weapon Category from the list below. This model gains a +1 CBT Rating and Base Damage bonus when using a Weapon from that group. This counts on Ranged Attacks for Ranged Weapons and both Attack and Defense Checks for Close combat Weapons.

Include the Weapon category in parenthesis next to Weapon Expert on the Crew Manifest.

All Out Attack - Throwing his entire body into the effort, this warrior trades a balanced defense for an overbearing strike.

This Trait may be used when this model executes a Stand & Fight Action, and it gains a +3 CBT bonus for its Attacks.

However, if a Defender’s Defense Check result exceeds this model’s Attack Check result by any amount, it triggers a Counter-Attack.
5 SP

Fanatic - The model with this Trait is a crazed fanatic for its cause, whatever that might be. So resolute is his mind that he ignores even the most terrifying of circumstances.

For TruManity! – When executing a Charge Action this model gains +3 to its Weapon Reach in Close combat.
5 SP 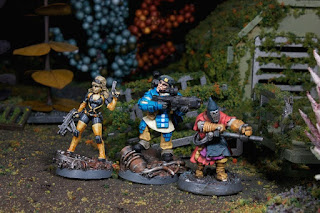 Faust23
I'm an old Grognard who started painting wargame miniatures 40 years ago. Author of Brink of Battle: Skirmish Gaming through the Ages & Co-Author on Epic Heroes: Skirmish Gaming in the Realms of Fantasy and Scrappers: Post-Apocalyptic Skirmish Wargames published by Osprey Games